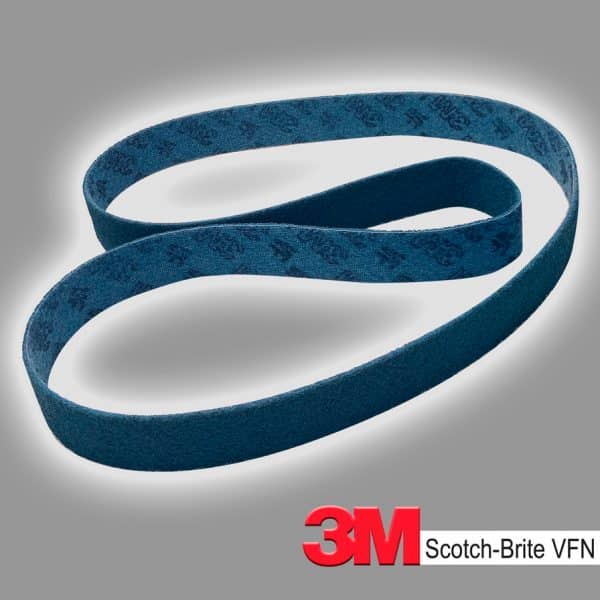 Multi-Purpose Belt Great for Tackling Multiple Applications
Working on flat parts especially — requires a belt that will abrade the surface closely. Our Scotch Brite™ Surface Conditioning Belt was designed to do just that. The nylon-backed belt has a reduced friction backing and is low stretch, so it’s unlikely to yield or stretch when run. This belt backing works well when the standard scrim belts stretch and fall off the machine.

Versatile Belt Options
One of the best benefits of our Scotch Brite™ Surface Conditioning is its versatility. Offered in a range of minerals, grades and converted forms, you’re likely to find the right match for your application. Aluminum oxide is a synthetic mineral known for its sharp cut, durability and long life.

The Many Benefits of Scotch Brite™ Belts
Available in narrow, wide and standard sizes, this belt is commonly run on a belt sander. Given their narrow widths, narrow belts tend to be a good match for workpieces with narrow areas and nooks and crannies, like lobes on a crankshaft or camshaft. Conversely, wide belts are a good match for larger workpieces like stamped parts, sheet metal parts, or dies. Independent of belt chosen, operators can rely on consistent performance; it’s what they’ve come to expect from our Scotch-Brite™ abrasives. Nonwoven technology makes our Scotch-Brite™ industrial abrasives — and belts — unique. A combination of fiber strands, resin, and abrasive mineral forms a thick, open web.

The spring-like nature of the fibers responds to contours and effectively removes unwanted burrs, soils, and contaminants while maintaining the geometry of the workpiece, which in turn reduces rework and boosts productivity. Gaps in the web allow swarf to escape, so debris does not clog the mineral. Fibers in the web continually break down with use to reveal fresh mineral for fast cut, long life and consistent results — part after part.

Ready To Ship In 3 Days

Please note that all prices are excl. 20% VAT!

There are no reviews yet.

To make this site work properly, we sometimes place small data files called cookies on your device. Most big websites do this too.
Accept